What Is Air Tightness Testing?

This article relates to the airtightness testing of buildings as commonly conducted on the completion of new dwellings as part of building regulations. This is also known as air pressure testing and air leakage testing.

Historically buildings were constructed to be draughty.  Very early buildings were built without a chimney and the smoke permeated through the open roof structure.  Until the introduction of modern central heating most houses had open fires so that air and combustion products were drawn up the chimney.  This air was replaced in the room by cold fresh air drawn in by either vents or cracks in the building structure.  Obviously, this was not a very efficient way of heating and the draughts caused discomfort.

Nowadays air leakage is differentiated from planned ventilation. A common philosophy is, “Build tight. Ventilate right”. Ventilation is essential to remove unwanted moisture and unsanitary air. This should be planned as part of the building services and is covered in Part F of the English Building regulations. Air leakage is the additional unwanted air flow that occurs in addition to the planned ventilation due to voids and cracks in the external structure.  Additional cold air from leakage reduces the heating system efficiency making it harder to reach the performance targets set Part L.  The air leakage rate is one of the inputs into SAP – but it can’t be practically measured until the dwelling is finished.  Therefore, an air leakage target is set at the SAP design stage before construction starts and this is included in the Part L design specifications.

Air leakage testing in the UK is normally performed on new dwellings to determine compliance with building regulations (Part L in England).  Dwellings are tested on completion and the results incorporated into SAP calculations that determine the compliance and generate the Energy Performance Certificate.  The blower door method of testing is currently used although a new pulse method is being developed, each has advantages and disadvantages. The remainder of this article assumes a blower door test as commonly used in the UK.

A blower door is inserted and sealed into and open external doorway. External openings and vents are closed, and all internal doors are opened - planned ventilators paths such as extractor vans chimneys and some types of flue are temporarily sealed.  The fan in the blower door is powered and adjusted to create a slight differential pressure compared to outside. Typically, air is blown out resulting in a slight depressurisation so that air tries to leak into the dwelling via cracks and voids etc.  Because the fan is fully calibrated the amount of flow is measured. Alternatively, the building may be pressurised by blowing air in - so that it leaks out through cracks etc in the envelope but otherwise the method and the results obtained are the same.

So, at a reference pressure (normally 50 pascals) the building leakage is measured (in cubic metres per hour).  In practice several readings are required at different pressures and the results are graphed and improved by compensating for the effects of background pressures, for atmospheric pressure and for variance caused by temperature differences inside and outside the dwelling - all are measured as part of the procedure.  Also, the test accuracy is determined by assessing the statistical deviation. If the deviation of a range of points is too high the test is invalidated.  Such deviations may be caused by wind gusts interfering with measurements or other undesirable anomalies. If this occurs the tester repeats the procedure until a valid test is obtained.

Obviously larger buildings tend to have greater leakage so that the results are normalised by dividing the results by a parameter reflecting the size of the building so that results can be standardised and compared.  This is typically either the building envelope area or the building volume - calculated in advance using plans and elevations provided by the client.
If we divide by volume, we get air changes per hour, and this is the basis of Passive house type accreditation systems.
If we calculate by the external envelope area (floor wall and roof area) and divide the test result by that we - get the air leakage rate per unit of envelope area (typically cubic metres per hour per square meter of envelope) This can be visualised as the average linear velocity of escape via the building envelope.  Typically targets for such leakage are 5 or less (m3/m2/hr at 50 pascals.)

The test leakage rate at 50 pascals is practical for testing but it is rather higher than the dwelling will experience in in practice. Therefore, in order to estimate the likely leakage under non-test conditions - some form of interpolation formula is required. This varies according to dwelling heating model used. For SAP, the air leakage test result in cubic metres per metre of envelope at 50 pascals is further divided by 20 and added as an extra air change rate per hour on top of ventilation rates that sap estimates from planned ventilation from services such as fans and flues.

Passive style houses generally require a much lower air leakage for certification - new houses normally require 0.6 air changes per hour (ACH) at 50 pascals or better. This is an order of magnitude better than current UK building regulations. Such houses typically have ventilation systems with heat recovery making air leakage very undesirable. Builders need to be knowledgeable and diligent about leakage during construction. Typically, the building envelope is preliminary tested as soon as it is practical to do so and whilst the leakage barrier is still exposed. Further tests may be performed to ensure continuity before a final test on completion.

What happens during a typical air leakage test?

The dwelling is normally finished, and sealant applied to a suitably high standard - knowledge is required to avoid common mistakes that cause leakage, and these must be applied at the appropriate stage of the build.  Not all leakage can be fixed after completion – behind kitchen and bathroom units for example. The electricity supply should be on to power the fan.
Prior to testing the Tester will have calculated either the building envelope or volume. On arrival the tester will inspect the dwelling to ensure that it is ready for testing.  The tester applies temporary sealing masks over planned ventilation systems and flues only as allowed in the appropriate procedure (either passive-house or building-control). Temporary sealing of other leakage paths with gaffer tape etc is not allowed and is removed if found. For passive house testing both a depressurisation and a pressurisation test are required, and the results are averaged.

The aim of regulations is to create an efficient dwelling to withstand the rigours of future demands during its lifetime.  Various products such as barriers and tapes are available to make a dwelling airtight. Air leakage is often misunderstood, and the extent of leakage paths are not appreciated by builders. Experience is required to create an airtight dwelling and use available products to maximum effect. These are designed to last the lifetime of the dwelling, unlike cloth “gaffer” tape etc which dries out after a few months.

In the UK Air leakage testers should be members of either the ATTMA or the IATS approved schemes who provide certificates that are acceptable to building control. 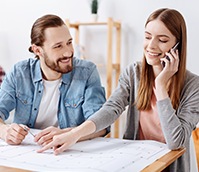 Contact us today to discuss your requirements with one of our experienced and friendly team.